Is Your State as Green as You Are?

Mother Nature loves you. Not only do you separate your recyclables and rinse them, you even categorize your glass and plastic by color. So when HR offers you a great promotion heading up the branch office in the far reaches of Alaska or Kentucky, your first question is, “Will that state fit my green lifestyle?” Not to worry! We’ve gathered some data to help you compare the environmental savvy of your current home state with your new one.

One of the first conservation lessons kids usually learn is to turn off the tap while brushing their teeth to save water. Judging by this map, it seems like the eastern part of the country took that lesson to heart. States shown in the darkest green are where individuals use the least amount of water per day while people living in states represented by the lighter greens might need a reminder about turning off that tap and keeping showers to a minimum. Interestingly enough, many of these same Western states routinely experience droughts and water shortages.

Maine wins the award for water conservation. According to numbers from the U.S. Geological Survey, people in Maine used only 54 gallons of water apiece each day in 2005. That’s a heck of a lot less than Nevada’s 190 gallons. Of course, some states are geographically “blessed” with rainfall, but residents of Washington State might be taking all that rainfall for granted with a water usage of 103 gallons per day.

If you want to take a deeper look at water consumption data, there are a lot of other water uses to consider like irrigation, mining and livestock production. But this per capita information gives great insight into each state’s general attitude about conserving resources. 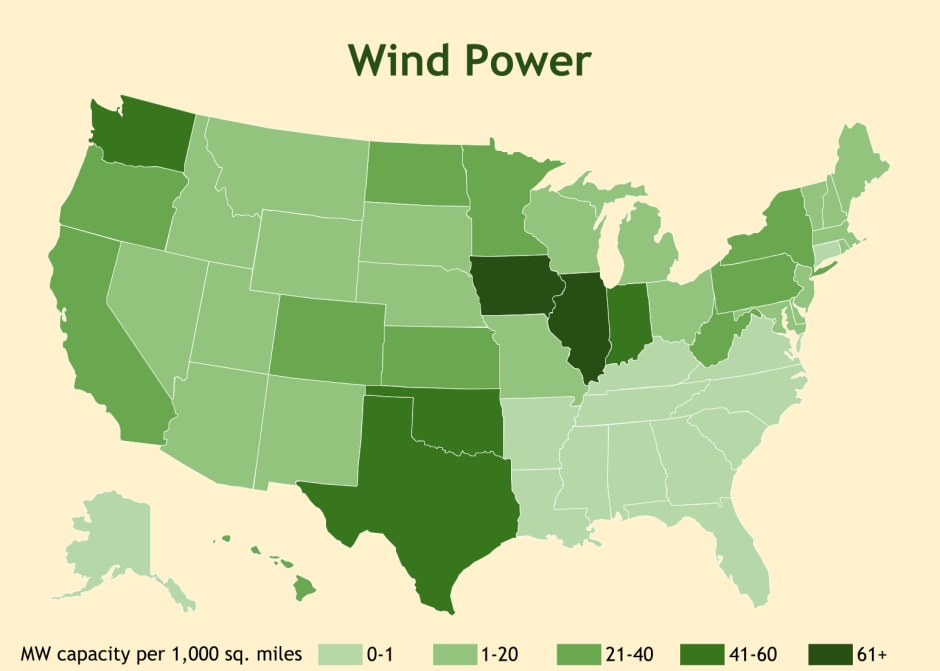 Another measure of eco-consciousness is the resources a state devotes to renewable energy. Here we’re using wind power as a measure, and we’ve accounted for area of land so some of those larger states (Texas) don’t come out on top just because they’re huge. Surprisingly, Texas still does really well in terms of megawatts produced according to the American Wind Energy Association. In raw numbers that means Texas had the capacity to produce 12,214 MW while states like Georgia, Florida, and Mississippi had zero capacity.

The real winners when it comes to wind power capacity by area are Iowa and Illinois. Although the states are smaller than Texas, they have the ability to generate 5,133 and 3,568 megawatts, respectively.

Of course if you look at a different form of renewable energy like hydroelectric power, the numbers will vary. So take a few minutes to figure out how your future home is harvesting the power of nature to keep your lights on. 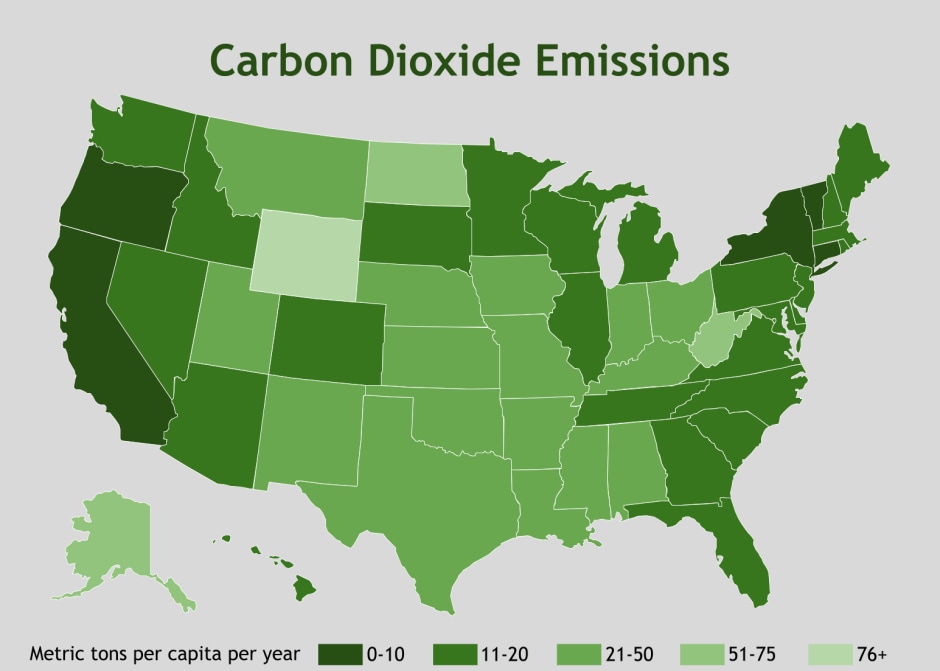 Carbon dioxide (CO2) is the main way humans are contributing to global warming. It makes sense, then, if you’re looking to live an environmentally-friendly life to choose a state where regulations and people’s habits mean fewer CO2 emissions. According to Wikipedia, New York has the lowest per capita CO2 emissions with 8.53 metric tons per year. Manhattan could be the best argument for increased population density and good public transit as ways to prevent global warming.

On the other end of the scale, Wyoming residents emit a whopping 112.61 metric tons per year of CO2. Even though relatively few people live in Wyoming, that’s still a lot of carbon dioxide—in fact it’s half again as much as North Dakota’s 73.51 metric tons. 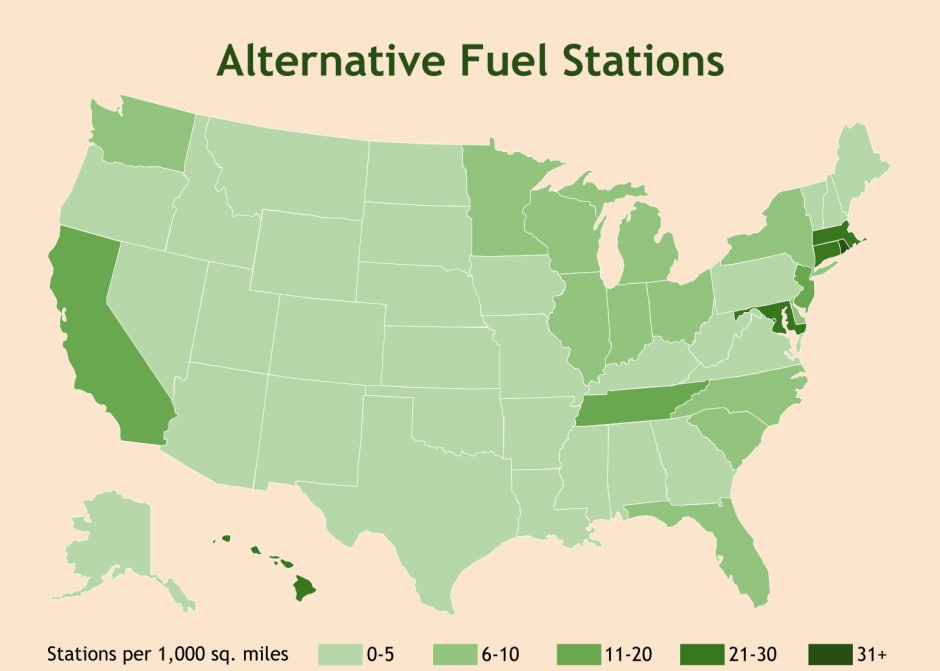 One of the best ways to curb greenhouse gas emissions is to use an alternative fuel in your vehicle. But how easy is it really to “gas” up? The Alternative Fueling Station Locator can help you locate the nearest biodiesel, CNG, electric, ethanol, hydrogen, LNG and propane station. Their interactive map also reveals some interesting trends in what types of fuels are popular in which parts of the country.

Again, to account for states that have a lot of landmass, we’ve looked at the density of stations. That’s part of the reason tiny Rhode Island comes out on top. Although they only have 44 stations, the state barely covers 1,000 miles. If you’re looking for sheer volume of stations, California tops the list with 1,909 and Texas comes in second with 1,058. Alaska lags behind with only 9 stations overall.

And the Greenest States Are… 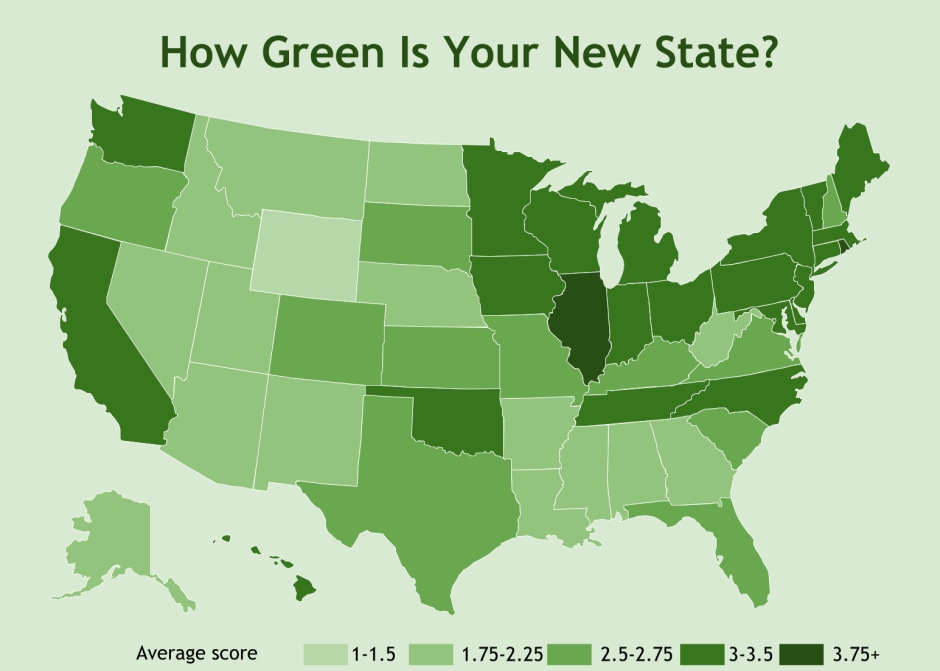 Illinois and Rhode Island? It’s true! Using an average score from the four criteria above, Illinois and Rhode Island come out on top of our green rankings. Other green areas of the country include most of the Rust Belt which includes everything from Wisconsin to Maine. We weren’t surprised to see California and Washington come out near the top—the West has a reputation for being green—but Oregon is not as green as we expected.

Using the same criteria, we found that Wyoming is the least green state in the nation. Other areas that haven’t yet gone green include most of the Rocky Mountain and Southeast states. But no one scored a perfect five, so there’s room for improvement everywhere.

Whether you’re moving to an eco-friendly oasis or the land of endless resource consumption, we hope that you’ll continue to make a positive difference by being careful about the resources you use and helping to educate others. Mother Nature will thank you.