Can I Still Drink Lattes? How to Manage Your Expenses While Repaying Student Loans

Financial experts have often said you should give up your lattes and other luxuries to pay off debt like student loans. But what if you love that afternoon cuppa and are likely to fall asleep at your desk if you sacrifice it? In other words, how do you spend money responsibly and still enjoy your life while you're repaying student loans?

That's a balance that Megan Robinson had to figure out since she graduated in 2015 from Virginia Tech in Blacksburg, Virginia, with more than $45,000 in student loan debt.

"I knew before I graduated college that I wanted to attack my debt head on," says the 24-year-old, who works now as a digital marketer and founded Goodbye to Broke, where she offers financial coaching part-time. However, when she focused too narrowly on paying off her debt, Robinson found herself struggling.

"One thing I've learned while paying off my debt is that you have to balance the future with the present," she says. "That's why it's important to build fun spending into your budget."

In the last three years, Robinson's figured out how to manage expenses and still enjoy her life. She sets aside money to reward herself for sticking to her financial goals and has lowered her debt to under $27,000. Here are some tips for how to strike that balance yourself when you're repaying student loans.

Start with Your Core Expenses

Most people will have some similar core expenses such as rent, food, utilities and loan obligations. But there are always going to be certain expenses you will consider essential that others will not.

"I prioritize buying healthy, whole foods," Robinson says. "I could take that extra $50-$100 per month and use it to pay off my debt faster, but it's worth it to me."

To afford to do that when money was especially tight, Robinson found savings elsewhere. "I didn't spend money on clothes for over a year," she says. "I also made homemade Christmas gifts, looked for free activities in my community and gave up eating out altogether for a while."

Meridith Bienvenue, 25, a mechanical engineer and blogger at She Who Can graduated in 2015 with $199,000 in student loans from Drexel University in Philadelphia. She set her budget by first subtracting the cost of her monthly student loan payments from her salary.

"Then I looked at what my basic needs were," she says. "My main priorities for expenses were rent, household utilities, loans, my phone bill, Internet, food, car payments and insurance."

To save money, she lived with a roommate in cheaper areas of Philadelphia until she recently moved in with her partner. She's also chosen cheaper phone plans with less data and less-than-optimal coverage.

"I don't eat out very often," she says. "I try to be cheap when it comes to groceries by buying store brand and not organic and I always pack my lunches for work."

All those savings have helped Bienvenue get her debt down to $182,000 in less than three years.

Add in Luxuries and Other Necessities

Once you start making more than you need for paying rent and repaying student loans, what's the best thing to do with your extra cash? First, you should start saving some money for emergencies and large purchases.

Robinson also suggests having a "fun fund." How much she allocates to it changes every month depending on other budget priorities. Sometimes, she puts aside a few hundred dollars toward a vacation, conference or a trip home to visit family. Other times, she's only able to put $20 or $30 aside and uses it to buy herself a small treat.

"The first year I was paying off my debt, I allocated almost nothing for present day fun or luxuries,"; she says, "which was a mistake because I was not very happy that first year."

"It sounds counter-intuitive to say you need to splurge to not spend money, but that's oftentimes the case," she says. "Whenever we deprive ourselves of even small luxuries, we start to become resentful and are less likely to stick to the budget."

Bienvenue also believes that the occasional treat is necessary so you don't feel like all you do is eat, sleep and work. She splurges every few months by going out to eat at a nice restaurant or buying clothes. When she does that, she adjusts her grocery budget to stay on track.

While salaries increase, so can expenses like rent and variable interest rate student loan payments. That's why it's important never to see either the expenses or the income in your budget as static.

"I check in with my spending at least once a week," Robinson says, "but I usually only update my budget at the beginning of every month."

She's recently increased her spending limit on clothes since she needs a new business wardrobe. By buying two to three new pieces a month with money that she would have otherwise put toward something else, she's been able to slowly acquire an updated wardrobe without busting her budget.

Bienvenue also adjusted her budget frequently when she became pregnant. She and her partner worked together to budget for the baby related expenses. Bienvenue cut back on things like eating out to help share the cost of ongoing expenses like diapers and formula. Her partner, who was debt-free, paid for the initial baby expenses and gave up smoking to make more room in his budget for their child. While you might not plan to start a family anytime soon, everyone has surprise expenses and emergencies that require adjusting their budget to accommodate.

A Budget Is Key

Ultimately, having a budget is critical to successfully managing expenses, Bienvenue says, especially repaying student loans. The better you become at budgeting, the more confident you'll be that you can afford your student loan payment every month, which means that you'll worry less. You also might find enough savings to pay off your student debt early, which will save you money since you'll pay less in interest.

"I always have anxiety about money," she says. "But being aware of exactly how much I have to spend, and when, helps me feel like I am going to survive until a time when I have more financial freedom." 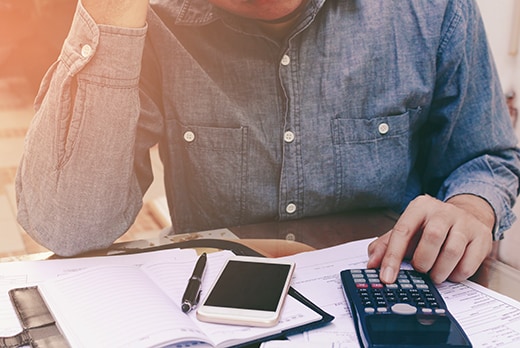 Find out how to prepare for the end of your grace period. Discover Student Loans offers tips on finding a job and saving for loan payments.