How People Manage Their Money

Money is top of mind for many people and can be a frequent source of stress. More than 6 in 10 adults consider money a significant source of stress, according to the American Psychological Association’s (APA) 2018 study of stress in America. For Generation Z, money is an even larger stressor than work.

Often, it’s not the money itself, but how we manage it, that may generate anxiety or stress. Since Americans have many different ways of managing their personal finances, we surveyed American adults about their money management strategies. We asked them questions like how they budget, how they feel about their finances, how they rate their money skills and how they pay off debt, among others. Most respondents (86 percent) rated their money management skills as average, above average or excellent. However, we found that 47 percent of respondents were not at all satisfied or only slightly satisfied with their current financial situation. To see what else we learned about how Americans manage their money, keep reading. 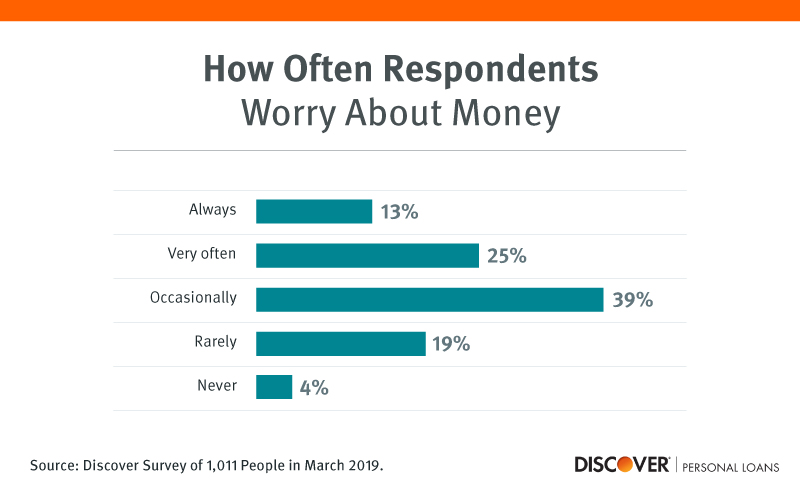 In a 2017 survey on stress in America, the APA asked people what about money caused them stress, more than a third of adults said that unexpected expenses. The Federal Reserve found that 40 percent of adults wouldn’t be able to cover an unexpected $400 expense or would be forced to sell a possession or borrow money to afford it. 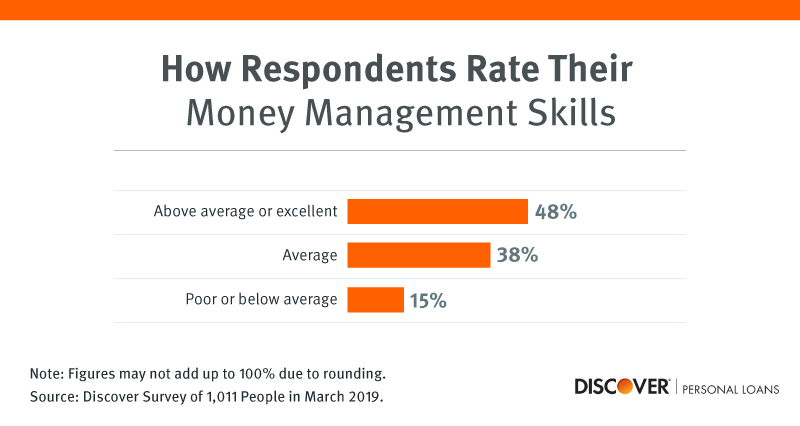 Around 30 percent of Americans have income that varies each month, according to the Federal Reserve’s most recent Report on the Economic Well-Being of U.S. Households. For 1 in 10 adults, these monthly fluctuations have created financial hardships.

Monitoring Budgets
Creating and sticking to a budget can be a cornerstone of successful money management. In recent years, there’s been a surge in the amount of digital money management tools and applications. Surprisingly, despite this, many survey respondents still prefer to monitor their budget using an excel sheet. This method topped using financial apps and online budget features through respondents’ banks in popularity by a narrow margin but was far more popular than accounting software. 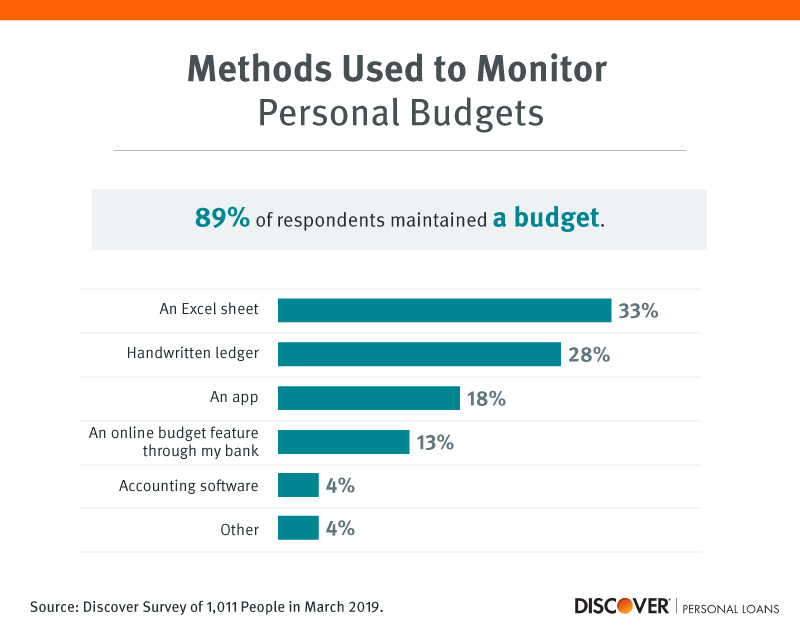 Equally surprising as Excel’s popularity may be that almost 30 percent of survey respondents still use a handwritten ledger to monitor their budget. While it’s unclear what’s driving the resurgence to analog, pen-and-paper budgeting isn’t as much of a lost art as some may believe. While only 17 percent of millennials said they use a handwritten ledger, 44 percent and 43 percent of baby boomers and the silent generation, respectively, relied on this monitor method.

Overspending
More often than not, budgets are meant to be followed pretty closely. The reality, though, is that most people do end up going over their budgets, most often, by impulse spending. Sixty-six percent of respondents said impulse spending is the reason they’ve overspent in their budget, either from shopping, dining out or other categories. Unexpected expenses, like car repairs and medical emergencies, were the secondary reason respondents overspent in their budgets, with 43 percent of respondents citing in the survey. 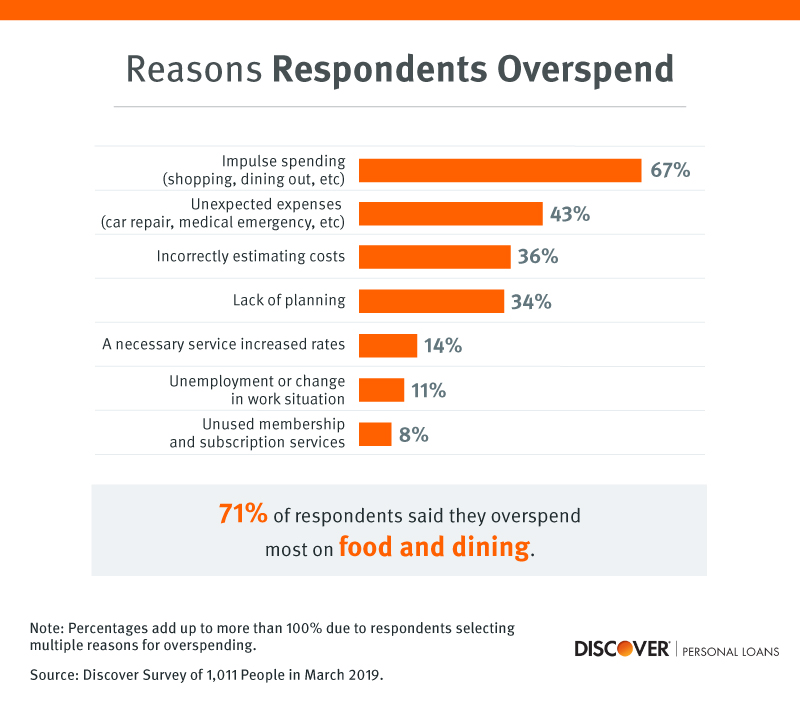 71% of respondents said they overspend most on food and dining.
Note: figures may not add up to 100% due to rounding and respondents given the ability to choose multiple answers.
Source: Discover Survey of 1,011 People in March 2019

Handling unexpected expenses can be a challenge, especially when you’ve already allocated funds to other as-necessary items, and there’s no room to budge. For 34 percent of respondents, a lack of planning caused them to overspend on their budget. Part of this poor planning could be attributed to incorrectly estimating how much things may cost. Smaller causes of overspending are service rate increases, unused membership or subscription services and unemployment or changes in work situation.

Paying Off Debts
Americans carry a collective $1 trillion in revolving debt. What strategies do the majority of people use to pay down their high balance and bills accumulated over time? 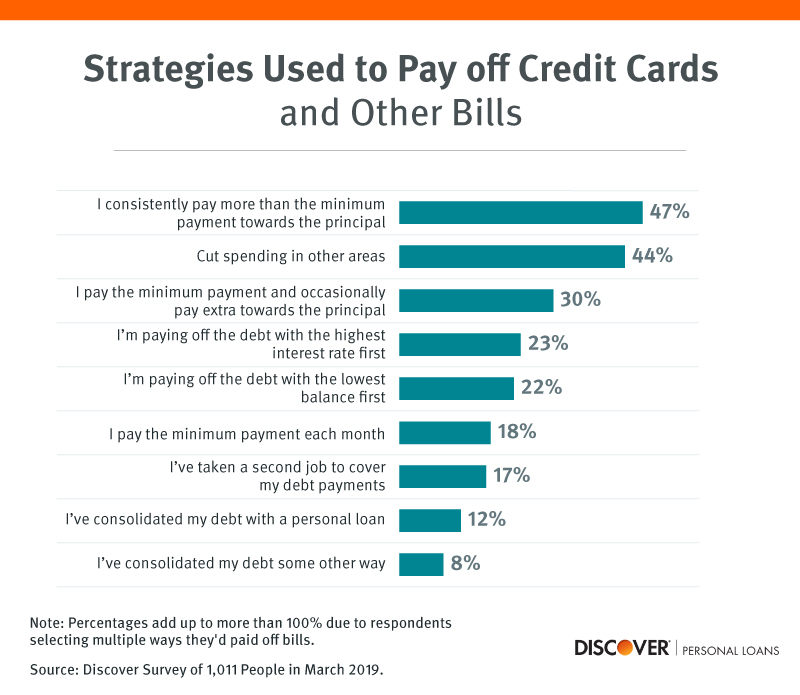 Forty-seven percent of people polled said they consistently pay more than the minimum payment toward the principal of their debt. But when choosing what debt to pay, more of our survey respondents said they pay off the debt with the highest interest rate first as opposed to tackling their lowest balance debts before others. While these higher-interest options may be the most utilized, 12 percent of respondents said they consolidated their debt with a personal loan, and only 8 percent said they consolidated their debt in another way. Consolidating higher-interest debt and bills with a personal loan simplifies your balances into one set monthly payment – often with a fixed interest rate and known payoff period. That way, you can save money on interest and pay down your debt more quickly.

The financial industry is rife with rules of thumb. From the six-month emergency fund rule to the 50/30/20 rule for budgeting, many Americans have opted to follow at least one of these financial rules. 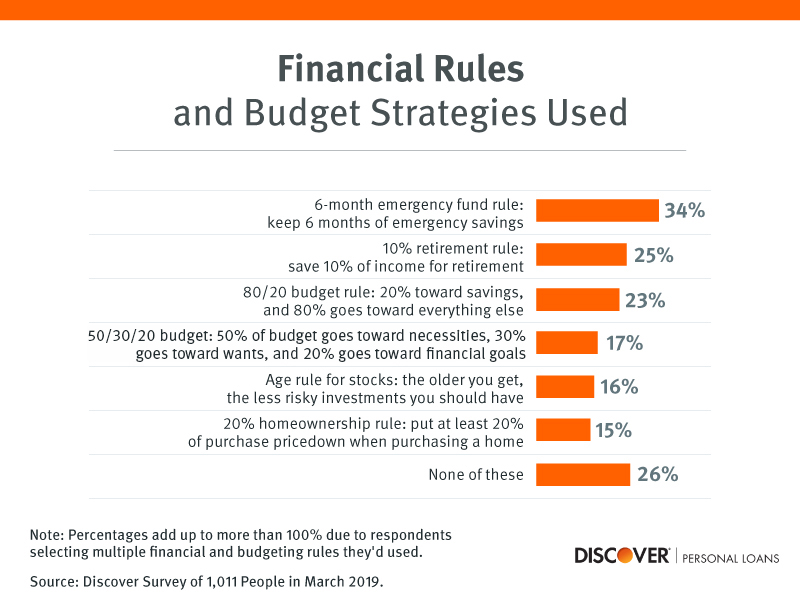 The most common financial strategy used by our respondents was the six-month emergency fund rule. This rule states that you should keep six months’ worth of expenses in a savings account in case of an emergency. More than 30 percent of our respondents said they’ve done this.

Remarkably, 26 percent said they don’t use these strategies asked.

How Do You Manage Your Money?
Money management is a fact of life for the majority of adults, but how they go about handling their finances varies. Whether you’re a spreadsheeter or an online app budgeter, hopefully, you’ve got a money management strategy that works for you. If not, perhaps some of our survey findings can give you new ideas on how to improve your financial planning and monitoring.

Whatever money challenges you may face, know that there are people and resources out there to help. Discover Personal Loans can help cover unexpected expenses with loans available up to $35,000. With fixed interest rates and various repayment terms to choose from, you can design your loan around the amount and length that best suits your needs.

Methodology
All figures shown above are from a survey that was conducted by Fractl on behalf of Discover Personal Loans. The survey was conducted in March of 2019 with a sample size of 1,011 residents of the United States (18+). The maximum margin of sampling error was +/- 3 percentage points with a 95 percent level of confidence.

As with most surveys, the self-reported data shown may be subject to biases inherent in any survey.

Responses were weighted by state and gender using population estimates from the U.S. Census Bureau to more accurately reflect the demographics of the U.S. population. They were used in place of raw respondent counts to determine all percentages shown, although weighted median figures were not used in the median budget amounts for spending categories presented. All figures shown above are not exact and have been rounded up or down to the nearest percentage point.

Fair Use Statement
We hope you’ve enjoyed our findings. If you’d like to share any of the above content, please feel free to do so. We just ask that you limit your sharing to noncommercial uses and link back to this page when you do share. Thank you!